What are your thoughts when a saxophone player can play a flurry of notes in a short amount of time? Or, they can simply play quickly with precision.

Whether playing fast is something you like or not, a musician who can play quickly and accurately is impressive.

However, being impressive is not the reason why we should work on playing fast. When we have the ability to play fast, we gain a tool to assist in our ability to be expressive in our music.

In order to play fast and accurately, there are a number of approaches and preparations we should make. For this post, our 1 Thing is this: start slow, and get as fast as you can, without error.

When I was a young saxophone player, I used to practice the wrong way, and here’s what I would do. If the music I was working on was a half a page of fast passages, I would practice the entire section slowly (all the way through) two or three times.

Because I practiced the music incorrectly the majority of the time (eight times out of ten), what do you think happened at the performance? Just add nerves and pressure to improper practice and the results produced inconsistency and errors.

Furthermore, after the performance, I would be upset at not playing perfectly, as I would remember the two times that I played correctly rather than the eight times I played incorrectly.

Understanding this would have provided a different perspective and given focus as to what the real problem was: I was conditioning my fingers to play incorrectly because of all the errors I practiced.

These errors occurred because I was attempting to play too fast, too soon. Once I understood this, I was able to identify the issue and make the change.

As I continued with my saxophone journey, and reached a point where I was able to teach, I learned that I was not alone with my approach that I employed when I was younger. What I did when I was young, was common with young players. Here are the common issues:

How to Practice Correctly

The answer to playing correctly, consistently, and fast, is actually very simple. However, you must have patience in order to reach your goal.

We’ll start simple. Let’s say you’re trying to play the G major scale as fast as you can.

Play the G major scale at ♩=60. Once you can play the entire scale at this tempo, with no errors, then proceed to step two.

Click up the metronome to ♩= 63 and play the entire scale.

Click up the metronome to ♩= 66 and play the entire scale.

Continue to click up the metronome and stop this pattern once you make your first error. Sometimes we make a small mistake, but if you feel you made an error because the tempo is too fast, then stop for the day. Please be patient and don’t jump up multiple tempos on the metronome; do one at a time (as shown above).

In your next practice session, start at ♩= 60 and follow the same pattern.

Continue to apply this to other scales, always returning to ♩= 60 each day.

If you follow this pattern, you will not only gain consistency, but you’ll end up playing faster than you thought possible. Those who apply this method, reach their goals, not solely on talent, but by applying consistency through correct practice methods.

Let us know how you do with this approach. What worked for you? What didn’t work? We look forward to hearing about your experience. 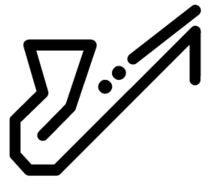 This course will show you how to succeed on the saxophone- step by step
A $50 VALUE!

Powered by Convert Plus